Abstract:
I will present several forms of democratic decision making that go far beyond your run-of-the-mill election. Specifically, I will discuss (i) liquid democracy, which allows voters to transitively delegate their votes; (ii) participatory budgeting, in which residents of a city or country vote on how its budget should be divided; and (iii) virtual democracy, which automates ethical decisions by holding elections among models of real voters. I will focus on the computational challenges that these new paradigms give rise to.

Bio:
Ariel Procaccia is an Associate Professor in the Computer Science Department at Carnegie Mellon University. He usually works on problems at the interface of computer science and economics. His distinctions include the IJCAI Computers and Thought Award (2015), the Sloan Research Fellowship (2015), the NSF Faculty Early Career Development Award (2014), and the IFAAMAS Victor Lesser Distinguished Dissertation Award (2009); as well as half a dozen paper awards, including Best Paper (2016) and Best Student Paper (2014) at the ACM Conference on Economics and Computation (EC). He is co-editor of the Handbook of Computational Social Choice (Cambridge University Press, 2016). 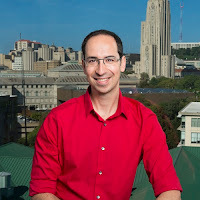